The West Karbi Anglong district is a new district formed out of the existing Karbi Anglong District of Assam in 2016. Hamren is the headquarter of the newly formed district. The district is a part of Karbi Anglong Autonomous Council, Diphu and it is administered according to the Sixth Scheduled of the Indian Constitution.It is situated in the heart of Assam bounded by DimaHasao districtin the East, Morigaon Districtin the west, Morigaon, Nagaon&HojaiDistrict in the north, and the state of Meghalaya and DimaHasao district in the south. The district with dense tropical forest covered hills and plains is situated in the latitude 25°33´N to 26º09´N and longitude 92º08´E to 93º04´E.

-    Climate:
Due to variation in the topography, this hill zone experiences different climates in different parts. The winter commences from October and continues till February. During Summer, the atmosphere becomes sultry. The temperature ranges from 6 ºC to 12ºC and 23°C to 32°C in summer. The average rainfall is about 2416 mm.

-    Population Pattern:
The population of the district is predominantly tribal. The major tribalethnic groups of this district are Karbis, Bodos, Dimasas,Tiwas, Khasis, Garos. Besides, a large number of non-tribals also live together in this hill region.

•    Highest Mountain Peak:
Even though, the district is dotted with hills, a few of which can be categorized into Mountain. Among them, the highest is the Laru Peak which is at about 1290 metres above the sea level. 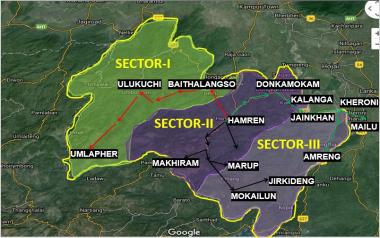